I am always crusading against the use of all forms of garlic ersatz, especially ever since one of my demo guests asked: “If I ever run out of garlic powder, can I settle for fresh?” ! So, I was at it again, at my last demo, and someone who apparently wasn’t listening, or who had just walked in just as I had finished exhorting the crowd, asked at the top of her lungs: “shouldn’t we at least put on some garlic powder or something, just to give it taam?” She seemed nothing short of G-dsent, just to prove my point. After the general hilarity subsided, we clued her in: NO garlic powder. Period!!!

with the Ladies of Chabad of the West Side's Women's Circle. 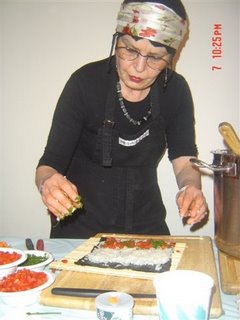 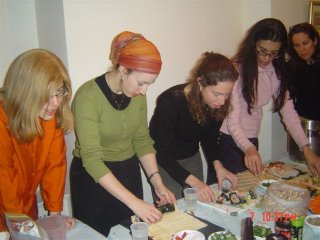 My lovely daughter in law Elisheva, a graduate of the New York School of Interior Design on the , in the field since 2000, has joined forces with Llynn Russell, a lifelong artist and painter specializing in home decorating art: faux finishing, mural painting, color, window treatments, etc… Together they formed Raymon-Russell Interiors. Elisheva has shown me images of their beautiful work. I loved the originality and youthfulness, whether they choose to go with traditional or eclectic or everything in between. They clearly bring to bear their vision, their fresh outlook and their attention to individuality on the treatment of each space.

My husband recently discovered the wonderful Cantor Helfgot, whose heavenly singing he blasted everywhere for weeks, at home, in the car, at the children’s home. It became a kind of obsession, and at the end of late demo nights I would come exhausted, turning the key in the door with great trepidation, knowing full well what to expect: cantor Helfgot declaiming in every corner of the house. Just as I thought we would go out of our minds from music overdose, my husband announced defiantly he had bought tickets to a Helfgot concert in for the whole family. That was the last straw, but there was no avoiding the outing. I consoled myself by inviting the whole group to a pre-concert dinner at home that evening, to soften the blow. Well, the rest, as they say, is history. Imagine a concert hall, filled well beyond capacity, come to admire Cantor Helfgot’s magic, accompanied by the New York Philharmonic, presented by dozens of dignitaries. It was an unforgettable night. Afterwards I listened to his CDs even without my husband’s urging and cajoling.

Then the invitation came: Would I like to give a cooking demo in , during a 3-day program organized by Cantors’ World, with an all-star cast which prominently included Cantor Helfgot? My answer was, you bet! You see, I share something with Helfgot, albeit modestly: he and I practice professions that only very recently were put on the map in a big way. Cantor, cook. Who ever dreamed that an activity that was conducted in the intimacy and the humbleness of the shtible would one day burst out on the performing art scene? Even the Philharmonic and the whole music establishment were in awe. What a triumph for Chazzanut! Likewise, cooks, even the most talented ones, cooked solely for their families, unless they were poor widows or orphans who cooked for the masses in order to subsist. Look at the world of cooking now! Yes, we cooks are getting a lot of mileage and long-overdue recognition. And I am proud to have shared that feeling with someone as awesome as Cantor Helfgot! More power to you, Bnei Brak Boy! May you continue to bring nothing but pride and joy to Klal !

Rachel, an enthusiast of my cooking classes, who recently spent one year in New York with her family while her husband was doing his medical residency (and who never missed a single weekly class), recently invited me to give a demo in her neighborhood in Los Angeles. During my visit, her mother gave me some goodies she grew in her orchard: magnificent citrus, loquats and mint. For the road, she urged me. The whole airplane smelled like heaven.

Rachel’s mother came to just a couple of weeks ago, and dropped some more goodies for me, which included 3 spectacular, gigantic etrogim, of a size and caliber nothing short of biblical. I had just seen the movie “Ushpizin”, and couldn’t help thinking these were unquestionably the thousand-shekel etrogim. I was in such awe of them, I was so uneasy about possibly botching such perfect creations I spent a near-sleepless night plotting a concoction that would do them (and their gardener) proud. I resolved to make an Etrog liqueur. Of course I had tried my hand at it several times before, as I was a natural recipient for all the neighbors’ discarded etrogim at the end of each Sukkot holiday. The results were always pleasant but they lacked the brilliance and the uniqueness that make all artisanal preparations, well, artisanal.

Well, this shabbos I served the work-in-progress (ideally, it should steep several months, and my mixture was only about 10 days old). Oh my gosh, it was disappearing so fast I was only able to rescue a small amount, which is now under lock and key while it fully “incubates”. It was voted best etrog liqueur, and it can only get better with time. So, if the final results are as good as the promise they hold, we will share the secret!

The other day I served a holistic meal which preceded a talk by Laibl Wolf, the famous Australian psychiatrist-holistic speaker. I loved the idea, because I only have eyes for Kosher, nutritious, no-nonsense food, and the concept gave me plenty of room for creativity. I didn’t for a minute tell myself I would be limited by the absence of some egregious goodies (white sugar, white flour, white rice, etc…). The menu I composed was so suitable for the occasion, and the food was so well received, that I feel compelled to be a pal and share it with you. It is always a thrill, to see that food that is one hundred per cent nutritionally sound and good for you is also one hundred per cent delicious and exciting, in short, good enough for distinguished company. So, here comes:

kale and mustard greens with beets and hijiki, with a chinese dressing

Have flowers, will travel 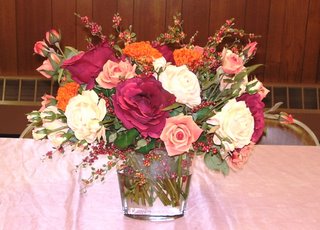 A few months ago my sister gave me a budget to make a silk flower centerpiece for her synagogue in Columbus Ohio, a gift from one of its members in his beloved departed daughter’s memory. I had grand ideas. I haunted countless flower showrooms, and ordered splendid flowers, all white and elegant and majestic, and a gigantic glass vase to house them. But there was a glitch: every time I hunkered down to the task, one pesky question kept tormenting me: How is this mammoth piece of work going to make its way to Columbus, if the flowers and I are in New York? After mulling the plan over for weeks, I decided to ship all the flowers directly to the synagogue, and bought a round-trip plane ticket to .

There was great excitement in my sister’s neighborhood: In one fell swoop, I was going to visit my sister, her family and her friends, with all the fun it entailed, and I was commissioned to the most sumptuous flower assignment to date. Members of the synagogue sneaked in to see the work in progress, while I clipped and I glued and I tied for hours, walking around my creation doggedly and from every angle imaginable until I was totally satisfied it looked the most beautiful it could look. 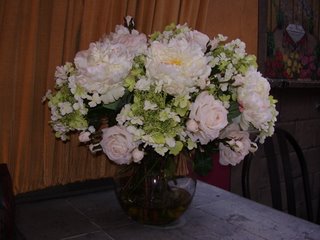 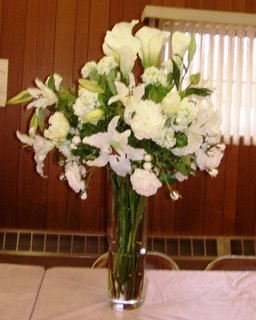 At last, with a thousands precautions, we lifted the finished product to its final home, a stand in the center of the synagogue hall. We displayed it just in time for Shabbos, and the couple hundred members who came for the services, marveled at the new addition in their shul, and ran to smell and touch the flowers. They were bewildered when they realized the flowers were made of silk. What better tribute could I get for my efforts? Food and flowers, that’s what I devote my life work to. How lucky can I get? See for yourself!